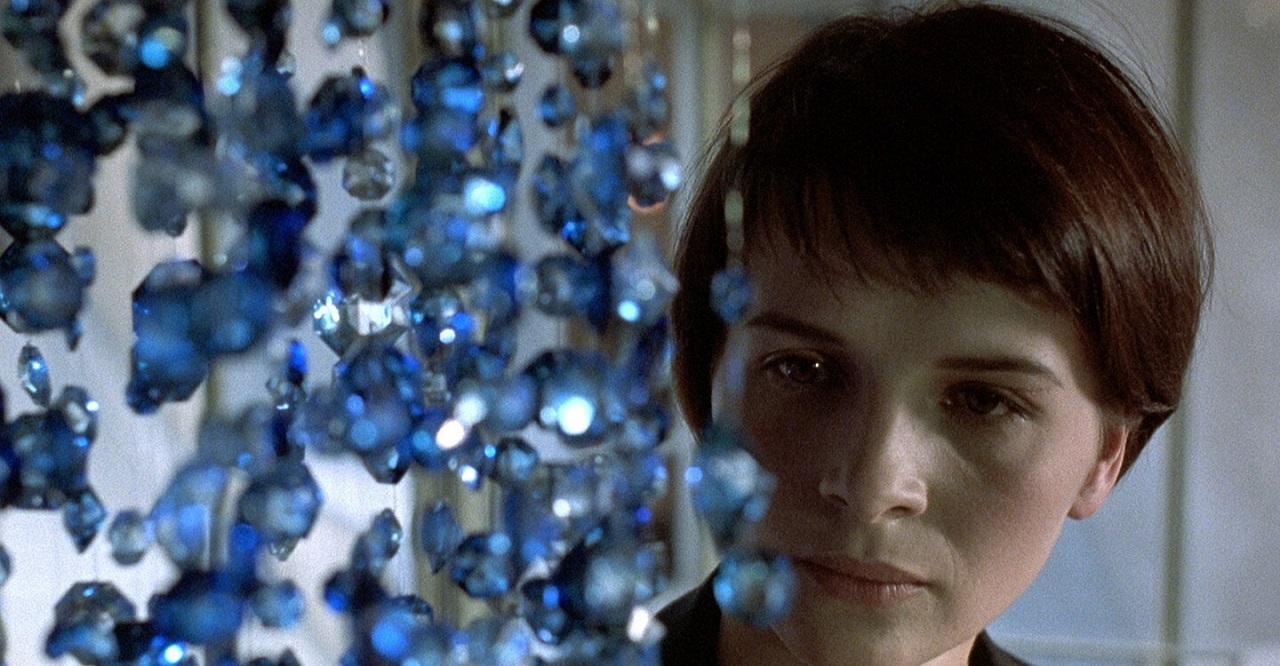 Three Colours: Blue is the first film from Krzysztof Kieślowski‎’s atmospheric, intriguing, evocative Three Colours trilogy. The enigmatic arthouse masterpieces explore different facets of the human condition with a refined sensibility and aesthetic elegance. The three films have been interpreted as an anti-tragedy, an anti-comedy, and an anti-romance by Roger Ebert. The symbolism behind Three Colours: Blue, White, and Red refers to the French flag and the values associated with each colour- liberté, égalité, fraternité- the national motto of France. Each colour is also significantly connected to the mood and mental state of the characters.

Three Colours: Blue is a moving cinematic tale about death, grief, rebirth, and (emotional) freedom, conveyed through gripping, poetic cinematography and a hypnotising, frisson-inducing soundtrack by Zbigniew Preisner. The film starts on a grim note, within a bleak landscape. Julie, one of Binoche’s most powerful and profound performances, is a strangely compelling character who goes through a life-changing traumatic event, which projects her into a perpetually solipsistic state. The story is an exploration of the psychological metamorphosis a young widow goes through as a trauma response. Although she seems derealised, absent-minded, and in a trance, there is something about Juliette Binoche’s performance that entrances viewers, allowing us to form an emotional connection to an emotionally disconnected character.

The cold colour palette of the film matches the veils of numbness and depression the protagonist initially wraps herself in whilst suppressing her sorrow in a period of mourning. Both present and absent, alive yet emotionally unresponsive, Julie seems to inhabit an uncanny emotional landscape, which is reflected through soul-stirring cinematography. The soft, ethereal blue lights Julie’s face is often bathed in are used to explore and evoke her feelings and memories. In an attempt to set herself free from the dark clouds she is surrounded by, to escape the heavy burden of grief, the despondent protagonist decides to sell her house and all her possessions, make financial arrangements for her mother and her staff, burn her dead husband’s musical compositions, and start a new life. Whilst she initially seeks a superficial sense of freedom emerging from breaking ties with her past, with everything and everyone in it, and from the anonymity of moving to a new place in Paris, she eventually reconnects to the lightness of being.