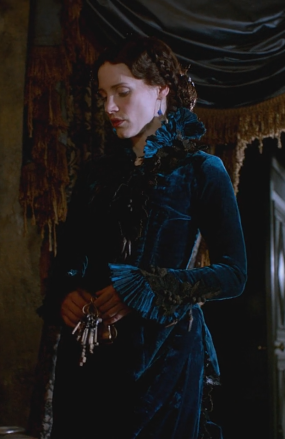 Crimson Peak (2015), directed by Guillermo del Toro, is a visually stunning, gloomy cinematic horror spectacle, noted for its incredible and haunting aesthetic. A particularly remarkable and alluring feature of the intricate production design is Lucille’s breathtaking blue velvet dress. The bewitching symbolically-charged Victorian design of the dress includes a black garland resembling a vine with withered leaves, claustrophobically climbing towards her pale neck. The owner, played by the mesmerising Jessica Chastain, is a beautiful, tense, frigidly graceful corset-wearing ice queen filled with dark repressed emotions, whose attire reflects her inner state. Her blue, heavy rigid dress seems to blend with her eerie funereal surroundings, the underwater feeling given by the aquatic colours and the flickering interplay of light and darkness, the dark curtains, and the grandiose blue walls of the Gothic mansion. She is tragically connected to the ominous house and the dead vines tangled up around her body further anchor her in it, symbolising her psychological confinement. She is often shown in contrast to pure, innocent, and lively Edith, played by Mia Wasikowska, who wears light and loose gowns.